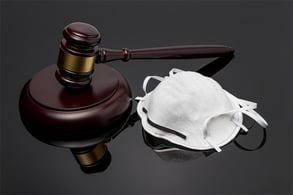 Abstract: During the COVID-19 pandemic, governmental authorities have ordered many nonessential businesses to temporarily shut down. Hundreds of businesses have filed claims under their business interruption coverage, claims that insurers generally have denied. This article summarizes a ruling in one of the first such cases to go to court, which has given insurers confidence that their denials will stand.

During the COVID-19 pandemic, governmental authorities have ordered many nonessential businesses to shut down temporarily. Hundreds of companies have filed claims under their business interruption coverage — claims that insurers generally have denied. The ruling in one of the first such cases to go to court has given insurers confidence that their denials will stand. But that ruling might not be as far-reaching as they hope.

The owner of two restaurants in Michigan filed a lawsuit after his insurer denied his $650,000 claim. The owner alleged that the governor’s stay-at-home order interfered with his use of the businesses. The insurer countered that business interruption coverage is triggered only by the loss of or damages to the physical property.

The Ingham County court found it clear from the policy language that only direct physical loss was covered. According to the judge, such loss requires something tangible that alters the physical integrity of property. The complaint alleged no such loss or damage. The judge acknowledged that government acts can trigger business interruption coverage. But that coverage still requires physical loss or damage.

The court also found that, even if physical loss or damage existed, the policy’s virus exclusion would apply. The exclusion stated that the insurer “will not pay for loss or damages caused by or resulting from any virus ... that induces or is capable of inducing physical distress, illness, or disease.” The court rejected the insured’s argument that this exclusion was vague.

Although the court’s ruling in this case was good news for the insurer, it remains to be seen how applicable it will be to other disputes. Courts in other states, for example, have previously found that business interruption coverage applied where the insured sustained a loss of use without any physical damage to property.

Moreover, policy language can vary greatly as to coverage of grants and exclusions. For instance, some policies expressly cover “communicable disease.” In addition, the Michigan court wasn’t required to consider whether the entry of COVID-19 upon the premises would satisfy the direct physical loss requirement because the complaint asserted that no one with the virus entered. It’s possible a court could find the virus to be something tangible that harms the property’s physical integrity.

Many other cases under similar circumstances have yet to go to court. Neither insurers nor insureds should read too much into this single ruling. But it may provide helpful guidance in similar situations.