In April 2018, the IRS released temporary guidance on the amended limit on deductions for business interest expense for tax years beginning in 2018. Taxpayers were allowed to rely on that guidance while waiting for regulations. The IRS has now published proposed regulations that taxpayers can rely on until final regs are released. 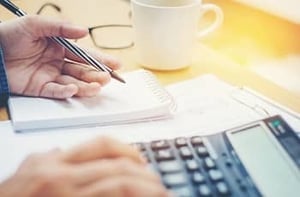 The proposed regs significantly expand on the temporary guidance. They include, among other notable provisions, a broader definition of interest than businesses have applied in the past.

The deduction limit — then and now

Before the Tax Cuts and Jobs Act (TCJA) was enacted, corporations were prohibited from deducting “disqualified interest” expense. This occurred when the borrower’s debt equaled more than one and one-half times its equity and net interest expenses exceeded 50% of its adjusted taxable income (ATI), as computed without regard to deductions for net interest expense, net operating losses, domestic production activities, depreciation, amortization and depletion.

Taxpayers could carry forward excess interest (meaning any interest that couldn’t be deducted due to the 50% of ATI limit) indefinitely. Any excess limit (the excess of 50% of the borrower’s ATI over its net interest expense) could be carried forward for three years.

For tax years beginning after 2017, the TCJA amended Section 163(j) of the Internal Revenue Code to limit the deduction for business interest incurred by both corporate and noncorporate taxpayers to the sum of:

The limit applies to all taxpayers with business interest expense, except those with average annual gross receipts of $25 million or less (adjusted annually for inflation); real estate or farming businesses that elect to exempt themselves; certain regulated utilities; and certain trades or businesses, including those performing services as an employee.

The amended rules allow for the indefinite carryforward of any business interest not deducted because of the limit. With limited exceptions, taxpayers can’t carry forward “excess” limit amounts to years beginning after December 31, 2017.

The new definition of “interest”

The proposed regs define “interest” as “any amount paid or accrued as compensation for the use or forbearance of money under the terms of an instrument or contractual arrangement, including a series of transactions.” The definition also includes amounts treated as interest under other tax code provisions or tax regs (for example, original issue discounts and accrued market discounts).

The far-reaching definition encompasses interest on conventional debt instruments as well as interest associated with transactions that are debt in substance, if not in form. The definition includes as interest certain amounts that are closely related to interest and affect the economic yield or cost of funds in a transaction involving interest, regardless of whether the amounts are compensation for the use or forbearance of money on a standalone basis. Examples include substitute interest payments, certain debt issuance costs and certain commitment fees.

The proposed regs also include an antiavoidance rule to prevent transactions that are essentially financing transactions from avoiding the limit. It treats as interest expense any expense or loss predominantly incurred based on the time value of money when a taxpayer secures the use of funds for a period of time. Amounts associated with time-value components that weren’t previously treated as interest now would be deemed interest. A swap transaction with significant nonperiodic payments, for instance, would be treated as two separate transactions — an on-market, level payment swap and a loan.

This likely will make it more difficult to negotiate financing deals with lenders that are structured to increase the borrower’s deductible costs and reduce its costs subject to limit. For example, in the past, a business might negotiate a lower interest rate in exchange for a higher loan commitment fee that it could fully deduct. Now, however, that fee could be considered interest expense. The impact will, of course, be greater as a company takes on more debt or interest rates edge higher.

ATI is calculated by computing the taxable income for the year as if all business interest expense is deductible and applying certain adjustments, as either additions or subtractions. The proposed regs include both the adjustments already specified in Sec. 163(j) and several additional adjustments not provided in the tax provision.

• Any item of income, gain, deduction or loss that isn’t properly allocable to a trade or business,

• Deductions for qualified business income, and

• Deductions for depreciation, amortization and depletion for taxable years beginning before January 1, 2022.

The IRS has added adjustments to prevent double counting and other distortions. For example, the proposed regs require the addition of capital loss carrybacks or carryovers.

Allocation of expense and income to excepted businesses

The proposed regs include rules for determining the amount of a taxpayer’s interest expense and income that should be allocated to a business that’s subject to the business interest deduction limit when the taxpayer also is engaged in an “excepted” business that isn’t.

The proposed regs address a range of additional issues, including the application of the rules to consolidated groups, partnerships and partners, S corporations, and controlled foreign corporations. We can help you understand the proposed regs and how they might affect your business.

Contact us if you have questions about how the proposed legislation may affect your tax planning.