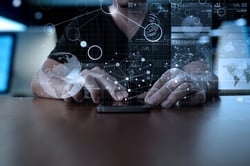 On September 29, 2020, the Ohio Supreme Court decided in favor of the taxpayer in determining where the benefit of certain services and intangibles purchases were received for purposes of Ohio’s Commercial Activity Tax (CAT). (Defender Security Company v. McClain, 2020-Ohio-4594).

The taxpayer, Defender Security Company (“Defender”), is an Indianapolis based company with four Ohio locations.  It sells security services contracts to customers both within and outside of Ohio as an authorized dealer of ADT Security Services, Inc (“ADT”). The service contracts that it secures are then resold to ADT, which has its principal place of business in Colorado and is engaged in providing security monitoring services.

The taxpayer requested a $73,334.82 refund of Ohio’s Commercial Activity Tax (“CAT”). The tax in question was paid on gross receipts earned between January 2011 and December 2013. The CAT is imposed on gross receipts derived from income producing activity in Ohio, and the receipts at issue in this case consisted of payments made by ADT to Defender for these contracts. As part of ADT’s agreement with Defender, it has the right to reject certain contracts and did not accept all contracts originally sold by the taxpayer.

Defender filed amended returns seeking a refund of CAT paid on receipts from sales of the security monitoring service contracts to ADT. In the taxpayer’s view, the transactions with ADT (Defender’s customer) received the benefit of the contracts outside Ohio at its principal place of business in Colorado, and therefore the receipts should be sitused out-of-state.

The Commissioner denied the refund on the basis that the benefit from the sale of the security monitoring contracts with ADT was wholly received in Ohio, where the ultimate security monitoring services were provided to protect individuals and property located in Ohio.  The issue was initially heard by the Tax Commissioner, the Ohio Board of Tax Appeals, and then the Franklin County appeals court.  Defender lost in all three cases, thus Defender appealed the case to the Ohio Supreme Court.

Defender argued that ADT purchased intangible contract rights and that its physical locations outside Ohio were the places where ADT actually used and received the benefit of those services.

The court agreed, concluding that the Tax Commissioner, the Board of Tax Appeals, and the appellate court failed to properly distinguish between the benefit that Ohio consumers received from ADT and that ADT received by purchasing consumer contracts from Defender.  The benefit derived from the purchase by ADT is based upon it receiving payments from Ohio customers in consideration for that company providing the monitoring services from its locations outside Ohio. Because ADT used and received the benefit of the contracts it purchased outside Ohio, Defender’s receipts from the sale of those contracts to ADT (Colorado) should not be sitused to Ohio.

The Supreme Court then addressed additional issues, including that an Ohio administrative rule addressing service receipts was inapplicable because the Defender was not providing services for ADT. Instead, Defender was selling intangible assets. The Ohio Supreme Court also rejected the Commissioner’s position that the term “benefit” had a special meaning that suggested government services that make business possible and profitable, such as police and fire protection. [The Commissioner attempted to argue that this special meaning required the benefit to occur in Ohio where ADT benefitted from the presence of police.]

Having decided the issue on statutory grounds, the court determined it was not necessary to review Defender’s constitutional claim that the risk of multiple taxation associated with the Commissioner’s interpretation of the dormant Commerce Clause.

This case demonstrates that understanding where the benefit of a service is received from the sale of a service or an intangible asset can be a rather difficult and challenging undertaking, especially when transactions involve more than one potential customer. This decision points out that it is necessary to properly distinguish between the benefit the Ohio customers received from  ADT (Colorado) and the benefit that it received by purchasing consumer contracts from Defender. Ohio taxpayers earning receipts from services or sales of intangible assets need to consider whether they are properly sourcing their receipts based on this ruling.