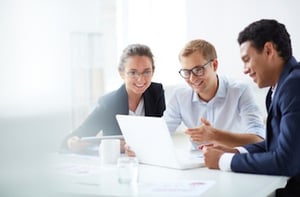 PPP in the House

The bipartisan, bicameral-crafted HR 7010 makes several changes to the rapidly implemented Paycheck Protection Program (PPP) administered by the Small Business Administration (SBA). The bill, authored by House Reps. Chip Roy, R-Tex., and Dean Phillips, D-Minn., was approved in the House by a 417-to-1 vote on May 27. After a brief stall in the Senate, HR 7010 cruised through the upper chamber by voice vote on June 3.

Most notably, the legislation includes some of the following PPP changes:

However, riding shotgun with the measure’s increased PPP flexibility is a list of remaining unanswered questions and potential issues. While policymakers and stakeholders alike await more Treasury and SBA guidance, additional legislative text is already in the works to iron out certain wrinkles in past PPP legislation and related IRS guidance.

"Our colleagues have continued to track the program’s [PPP] operation and recommend further tweaks where necessary. In recent days, Senator Collins helped strengthen and improve the House’s proposed PPP modifications before they passed the bill and sent it to us. And I know the senior Senator from Maine has already identified several more technical fixes for the new legislation that I hope Congress will address, "Senate Majority Leader Mitch McConnell, R-Ky., said on June 4 from the Senate floor.

Although the ink may still be drying on the PPP Flexibility Act, Sen. Susan Collins, R-Me., co-architect of the small business loan program, said on June 4 that her staff is currently drafting a PPP technical corrections bill. The next bill is expected to address concerns with HR 7010’s 60 percent "cliff", among other items.

"Two of my priorities would be to correct what I believe to be a drafting error in the House bill that eliminates partial forgiveness for small businesses with PPP loans who have been unable to retain, recall, or pay their full number of employees due to circumstances beyond the employer’s control," Collins said in a June 4 statement. "The House bill contains a cliff: even if a small employer spent 59 percent out of the 60 percent of the funding designated to pay their employees, none of the loan would be forgiven. The employer would be saddled with debt." Additionally, Collins noted the next PPP bill would allow for overhead funding to be used for masks and other protective gear for employees.

Fellow PPP policy architect Senate Small Business Committee Chair Marco Rubio, R-Fla., on June 4 also alluded to another PPP bill. "I appreciate the Administration’s flexibility and commitment to address the bill’s inadvertent technical errors that could create unintended consequences for small businesses as they seek forgiveness," Rubio said in a June 4 statement. "If the Administration cannot address these issues, Congress will need to fix them through additional legislation…," Rubio said.

Additionally, Sen. John Cornyn, R-Tex., told reporters on June 4 that Senate leadership is trying to take up the bipartisan Small Business Expense Protection Bill (S. 3612). The bill would clarify that receipt and forgiveness of a PPP loan does not affect the tax treatment of ordinary business expenses.

However, according to controversial IRS Notice 2020-32, businesses that qualify for PPP loan forgiveness will not be able to deduct certain expenses, including wages, paid for by the loan. "The money coming in the PPP is not taxable. So, if the money that is coming is not taxable, you cannot double dip," Mnuchin said. But Congress’s top, bipartisan tax writers immediately voiced disapproval of IRS and Treasury’s position, stating that the IRS guidance goes against congressional intent.

"[A]s was expressed to Treasury during the development of the PPP, we did not intend to deny the deductibility of ordinary and necessary business expenses, nor did these small businesses expect to lose deductions for their business expenses when they applied for a PPP loan," Senate Finance Committee Chairman Chuck Grassley, R-Iowa, ranking member Ron Wyden, D-Ore., and House Ways and Means Committee Chair Richard Neal, D-Mass., wrote in a recent letter to Mnuchin.

And while many business groups are also commending Congress’s approval of HR 7010, their leadership is also calling for more PPP-related legislation. "The PPP changes passed by both chambers are another important step in providing relief to small businesses that otherwise will not survive until the economic recovery phase," U.S. Travel Association Executive Vice President of Public Affairs and Policy Tori Emerson Barnes said in a statement. However, the Travel Association, similar to other industry trade groups, has called for additional PPP enhancements.

"While this measure does a good job making the PPP work better for businesses that are eligible, other PPP enhancements will be needed to make sure all the key pieces are in place when the recovery begins—in particular, extending eligibility to non-profit and quasi-governmental entities that are vital drivers of local and regional economic development," Barnes said.

To that end, it remains unclear at this time whether additional PPP changes, enhancements, and clarifications will come by way of Treasury and SBA guidance, another stand-alone bill, or catch a ride with the next round of economic relief legislation. However, prior to the Senate’s approval of HR 7010, McConnell submitted to the congressional record per Sen. Ron Johnson's, R-Wisc., hold on the bill, a letter from the measure’s bipartisan, bicameral authors and policy architects clarifying congressional intent for PPP loans covered period extension.

"The extension of the covered period in HR 7010 is to allow borrowers who received PPP loans before June 30, 2020, to continue to make expenditures for allowable uses until December 31, 2020," the record states. "The extension of the covered period does not authorize the [SBA] to issue any new PPP loans after June 30, 2020, as this date remains fixed by section 1102(b) of the CARES Act."

Meanwhile, in the spirit of PPP transparency, Rubio and Senate Small Business Committee ranking member Ben Cardin, D-Md., sent a letter this week to Treasury Secretary Mnuchin and SBA Administrator Jovita Carranza calling for more public disclosures of information related to PPP loans and borrowers. "Given the grave nature of this crisis and the unprecedented level of funding that has been appropriated, it is critical that the public and Congress have timely and complete information about where these funds are going, and the committee expects an increased level of transparency and accountability from the SBA," Rubio and Cardin wrote.

Some of the items Rubio and Cardin have requested be made publicly available on the SBA’s website include the following: