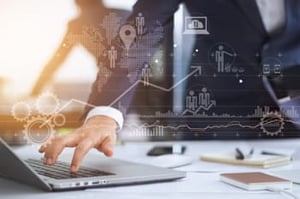 Organizations that use proactive data monitoring can reduce their fraud losses by an average of 54% and detect scams in half the time, according to the Association of Certified Fraud Examiners’ 2016 Report to the Nations. Here’s insight into how forensic accountants can use data analytics technology to detect patterns and uncover anomalies that may help unearth fraud in real time. A sidebar highlights three real-world examples of how data analytics can be used to detect and prevent fraud.

Historically, many organizations have relied on cumbersome manual processes — such as external audits and employee tips — to detect fraud scams. Unfortunately, these methods of detection are inherently reactive — that is, they flag suspicious activity well after the fact. They can also be hit-or-miss. Audit procedures, for example, often rely on sampling, which leaves large amounts of data unexamined.

Advances in data analytics now make it possible to examine enormous amounts of data — both inside and outside an organization — to uncover patterns, relationships, correlations, anomalies and other insights. This technology enables organizations to be proactive in monitoring their activities in or near real time and spotting high-risk or suspicious activities quickly and cost-effectively.

Data analytics helps reveal patterns that would be difficult or even impossible to detect using conventional methods. During the last several years, the U.S. Securities and Exchange Commission (SEC) has used data analytics to detect even the smallest securities fraud offenses. Its so-called “Robocop” program uses automation to quickly sift through enormous amounts of trading data and flag potentially fraudulent activity that warrants further investigation.

Consider insider trading. Traditionally, the SEC has employed a security-based approach, where it launches an investigation based on suspicious activity involving a specific stock or other security. Typically, the agency learns of these activities from news reports or from referrals from the Financial Industry Regulatory Authority (FINRA) about suspicious trading activity leading up to a merger, acquisition or other corporate event that affects the security’s price.

Based on this information, the agency searches through billions of lines of data furnished by brokerage and clearing firms to find out who traded the security prior to the event. By the time manual data searches are complete and the traders are contacted, the SEC has tipped its hand, giving traders an opportunity to cover their tracks.

Data analytics allows the SEC to take a more proactive, trader-based approach. This approach sifts through brokerage and clearing firm data to identify patterns, such as traders who trade the same securities. In turn, these patterns may be used to uncover relationships between traders or others with common sources of material nonpublic information, warranting further investigation. This helps the SEC conduct its initial insider trading investigation secretly, so evidence can be collected before initiating an enforcement action.

In a recent case, the SEC used data analytics to catch a defendant who allegedly traded on material nonpublic information about a pending merger of a pharmaceutical company. The SEC complaint alleged that the investor learned of the merger from a relative who worked for the acquirer.

The goal of data analytics is to detect potential fraud by spotting anomalies or deviations from “normal” behavior or patterns. To do that, an expert establishes a baseline of non-fraudulent activity to compare to the suspicious dataset.

It may also be possible to identify data known to be associated with fraud. Perhaps fraudulent activity is more likely to occur at certain times of the day, in certain geographic locations, in certain types of accounts or in certain amounts.

For example, suppose a company is concerned about invoice fraud. It determines that fraudsters usually create phony invoices with amounts that are just under the $2,500 approval limit. Data analytics identifies vendors with an unusually high percentage of invoices slightly below this threshold.

The longer fraud goes undetected, the more costly it becomes. By enabling organizations to be proactive rather than reactive in detecting fraud, data analytics helps minimize the damage.