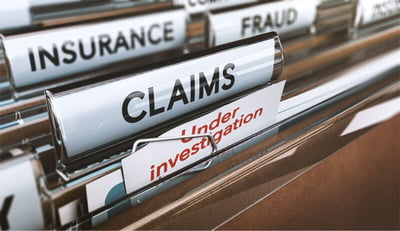 It is estimated that approximately 95% of businesses experience some form of employee theft. Theft can occur in varying degrees of severity, but this statistic depicts the reality and commonness of employee dishonesty in the workplace. Employee dishonesty is defined as any act of fraud or dishonesty committed by an employee against their employer.

To properly investigate a fraud, one must understand the three components of the fraud triangle which together, lead to fraudulent behavior. The fraud triangle consists of incentive/pressure to commit fraud (e.g. personal financial struggles), opportunity to commit the fraud (e.g. weak internal controls), and rationalization or justification for committing the fraud.

Some of the most common forms of employee dishonesty include credit card fraud, theft of cash, theft of inventory, and payment of fictitious vendors. Below we will review these examples in the context of insurance claims and discuss important considerations when analyzing the claims.

Employees with access to company cards pose a threat to commit credit card fraud, which will typically take the form of the employee using the card for personal expenditures. Credit card fraud often occurs over long periods when there is minimal supervision of credit card statements and a lack of segregation of duties or internal controls in a company.

Based on our experience, the principal (accused employee) will often begin the fraudulent scheme with a small, fraudulent expenditure that can generally be “buried” in their employer’s financials. However, over time, the principal will tend to become more comfortable with the process and will increase the frequency and volume of the theft. Eventually, the fraudulent transactions will become too difficult to “bury” and the theft will be discovered. This is the classic fraud behavior pattern. In other situations, the fraud is discovered when the employee leaves and any concealment processes are no longer in place, internal controls are modified and/or strengthened, or when a new Head of Finance joins a company.

Depending on the type of business and role of the employee, expenditures related to groceries, restaurants, travel, or office supplies could be either legitimate or fraudulent. As a simple example, in a recent engagement, the insured claimed an employee theft amount related to multiple flights and hotel charges on the company credit card. Flights and hotel expenses can be normal operating expenses for many businesses. However, in this case, we learned that the principal worked in accounts payable and was never required to travel for business purposes, which was confirmed in review of historical transactions and job descriptions. Thus, we had the information needed to isolate those travel-related transactions charged by the principal.

Understanding the nature and intricacies of the business along with the duties of the principal’s job will help one further evaluate and distinguish potential fraudulent expenditures.

There are many different scenarios where theft of cash by an employee can occur. Common examples include:

It is difficult for businesses to trace cash transactions as accurately as electronic payments. As a result, cash thefts are generally not discovered until the theft has occurred over a longer period of time and cash discrepancies become more apparent.

When evaluating an employee dishonesty claim related to cash theft, it is first important to get a full understanding of the insured’s normal cash handling procedures. This could include identifying:

In a recent engagement, the principal was an acting manager who temporarily assumed the position of manager while the company searched for a permanent replacement. At the end of each day, it was the acting manager’s responsibility to physically count the cash on hand, report the amount counted, and deposit that amount at the bank. At the time, the acting manager was the only employee monitoring the company bank statements and company financials. Due to the lack of internal controls, the principal was able to “short” the day-end cash count and steal the remainder without anyone noticing. It was not until three months later when the insured hired a permanent manager who noticed abnormalities upon review of the company financials. Once investigated, the principal’s theft was discovered.

Inventory theft occurs when an employee steals inventory from their employer, for either personal use or with the intent to re-sell the merchandise. Stolen inventory can range from small PPE items taken from a healthcare employer to rare materials or finished goods stored in a warehouse.

The types of inventory recording procedures vary hugely between businesses. Large operations may have detailed electronic perpetual inventory systems, strong internal controls, and conduct regular physical inventory counts. Smaller businesses may have handwritten inventory records, no internal controls, and may have never completed a full physical inventory count. The approach to the claim analysis will depend on the inventory procedures put in place by the insured and the resulting reports and documentation available for review. Unfortunately, businesses with the most limited inventory records are often those who fall victim to inventory theft. In these cases, it can be very challenging for the insured to document their claims for lost inventory.

In a recent engagement, we analyzed a claim presented by an insured that sold thousands of home appliances from a large warehouse. The business sold both new appliances and damaged/returned items at a discount. For the new appliances, the insured maintained a sophisticated inventory tracking system. However, for the damaged appliances that were sold at a discount, the inventory tracking process was much less formal. The principal in this case had the responsibility of selling damaged inventory and was able to exploit the lack of internal controls relating to the damaged items and steal inventory items for resale.

Fictitious vendor schemes occur when an employee responsible for vendor payments creates a fictitious vendor and fake invoices and initiates company payments to their personal account or to the account of another entity involved in the scheme. Generally, this can happen in a business environment lacking internal controls such as proper vendor verification and separation of duties.

Fictitious vendor schemes often take a long time to discover, as if the scheme is occurring, it is likely that the company does not regularly audit its vendor listing. Many times, the discovery of the scheme will happen when the company hires a new in-charge employee or updates the company vendor policy.

In a prior engagement, the principal had full control of the company’s accounts payable cycle. It was this employee’s responsibility to issue checks to all vendors. Due to the lack of internal controls, the employee was able to create a fictitious vendor using her daughter's name and address to route company checks to. This went on for over two years until the principal forgot to cash one of the checks issued. At the time, one control in place was to contact all vendors with checks issued but not yet cashed after one month. The theft was discovered when the company realized one of the outstanding checks was addressed to the principal‘s daughter.

When analyzing insurance claims for fictitious vendor schemes it is important to consider the following:

For example, in a recent engagement, an insured made a claim for thirty-five fake invoices amongst five vendors totaling $130,000. However, upon further investigation:

An often overlooked but important factor to consider when engaged in an employee dishonesty claim is whether or not there will be any recovery of the theft from the principal or other entities. For example, if a portion of a cash theft is paid back by the principal, that amount must be considered. In the case of credit card fraud, an insured might dispute any fraudulent charges with the credit card company and may be able to have the charges reversed, and the funds recovered.

Employee dishonesty schemes can take many forms and impact businesses in different ways. When analyzing insurance claims for employee dishonesty, it is essential to not only get an in-depth understanding of the insured’s business operations but also understand their internal controls, processes and ability to recover any of the amounts in question.

Since joining the firm in 2013, Brendan has specialized in providing investigative and forensic accounting services to the insurance industry and legal profession.