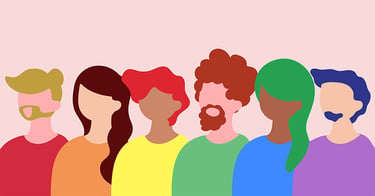 As the month of June arrives each year, so do celebrations across the country (and the world for that matter) devoted to recognition of Pride Month and the historical events that preceded it.  The plight of lesbian, gay, bisexual, and transgender (LGBT) Americans was certainly not immune to the overarching environment of social unrest and tumult in the United States during the late 1960’s and early 1970’s.

The “gay liberation movement”, as it was initially called, began not as a celebration but as a violent uprising in response to a police raid in the early morning hours of June 28, 1969 at the Stonewall Inn, located in the Greenwich Village neighborhood of New York City.  These raids were routine in the 1960’s, arising out of a prevalent social atmosphere of intolerance and fear which attempted to dehumanize, disregard, and erase the existence of LGBT people throughout the country.  The Stonewall Uprising was the culmination of growing resistance within the LGBT community to combat decades of these widespread efforts to deny basic human rights on the basis of a simple, nature-borne romantic preference.

Recently, I took the opportunity of the advent of Pride Month to sit down with Densil Porteous, the Executive Director of Stonewall Columbus (SWC).  SWC will celebrate its 40th anniversary this September of working towards the goal of “increasing the visibility and acceptance of the LGBT community.”  I am proud that the City of Columbus is widely recognized as one of the most LGBT-friendly cities in the United States.

I asked Densil about the challenge of ensuring this mission during the other 11 months of the year.  In addition to contributing monetary assets to SWC, he mentioned that it was important for corporations to bear the burden of acting in a manner that generally “demonstrates a commitment to find ways to empower the community and further the mission.”  Corporations should ask themselves if they have policies that support gender identity, for example, and to think intentionally about how thery demonstrate inclusion throughout the year.

One example he mentioned as a suggestion would be to implement “Pride 365” initiatives where they commit 365 hours a year to volunteer with an LGBT-supportive organization.  Corporate entities are in a unique position to support LGBT initiatives because of their resources relative to private citizens alone.

We talked also about how “corporate” Pride celebrations and parades have become over the years.  While some in the LGBT community are skeptical of the possibly nefarious reasons for this support, the changing social landscape has allowed leaders of LGBT organizations to become emboldened to stand up and take greater ownership over how those assets are used to support their missions.  Our communities are better when we invest in them, especially in the arena of “social infrastructure”.

Even as a gay man of a certain age (ahem!), I often find myself overflowing with pride and gratitude at the support I feel on a daily basis by those I surround myself with and my community at-large.  But, this is always tempered with the knowledge that there are still so many countless others who don’t have cohesive support systems and who continue to feel marginalized, forgotten, cast aside, and in some cases, literally, thrown away by those purporting to love them.  Theirs are the voices we raise when we cheer at a parade.  Theirs are the lives that we hope and promise will “get better”.  Theirs are the realities we must always remember while we live in our own.

While the Pride celebrations we enjoy now are much more joyous and ebullient affairs, we must always hearken back to the reality of the violent and dangerous origins of our history and those that came before us in the LGBT rights movement so as not to forget those who society already tried for so long to ignore.  Marsha P. Johnson is largely credited with being one of the primary originators of the Stonewall Uprising.  As a transgender woman of color, people just like her represent the most vilified, discriminated, and murdered cohort of the LGBT community.  It is in her memory and the memory of so many others that came before and followed after her, that we continue to fight for progress.  Because, as she once said, “no pride for some of us without liberation for all of us.”